Every Sunday from 1pm till 2pm Bonzai Basik Beats showcases a wide range of music including the best in Progressive House, Tech House, Techno and Deep House grooves, with guest mixes from some of the top DJs in those genres. 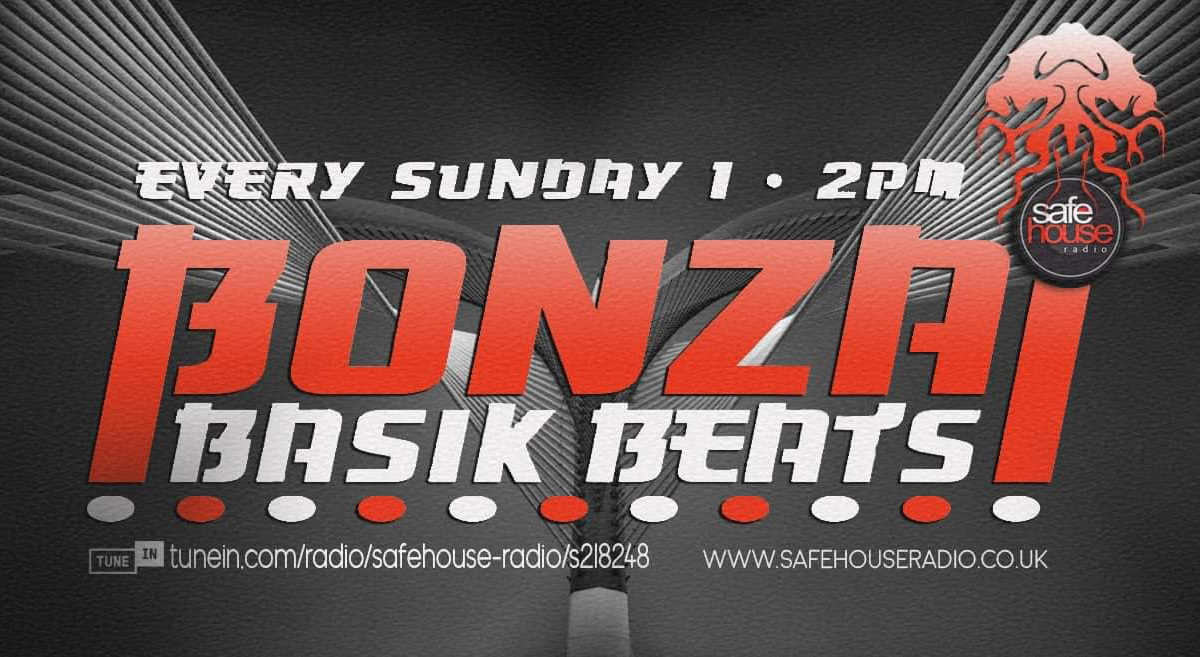 Banshee Worx was founded in May 2003 some 2 months after the closing of Lightning Records which was the company that took care of the Bonzai brand and imprint since 1992 until early March 2003. Then things changed and Banshee Worx was formed by Fly (owner and founder of the Bonzai trademark), Marnik (former International and A & R from Lightning Records) and 2 artist/producer/dj’s who were also part of the Lightning Records artist roster, namely Yves Deruyter, Belgium’s number one dj with huge, already considered classic, clubhits such as Calling Earth, The Rebel and Born Slippy. Last but not least there’s Laurent Véronnez, aka Airwave, without a doubt a man leading the electronic dance market with superior quality music. Remixing many of his colleagues and deejaying worldwide, he is the caterpillar of the musical bulldozers out there.

So, nothing much has changed, a new entity has been formed and the same driving forces behind the succes of the Bonzai imprint will continue to serve the universe with the greatest trance music with artists like Airwave, Yves Deruyter, Push, Plastic Boy, Quadran, Lolo, DJ Fire, Fire & Ice, Solar Factor, Cape Town, Philippe Van Mullem and many new ones to come.

Many years have passed since the launch of Banshee Worx and they are still expanding, dedicated and secure, with their little group of labels and artists. With the continuously descending physical music market, they have been devoting a lot of time in developing their on-line activities. Not only do they keep a weekly updated webstore running (including customized soundcarriers) but they have also launched the Bonzai Digital Network, where they offer all cd and vinyl releases, plus digital only releases for digital download at fair rates both via their own downloadshop powered by Audio Jelly and a range of digital download partners, including the number one worldwide downloadshop iTunes Music Store, Beatport, ID & T Dance-Tunes, Track It Down, Juno Download, Audio Jelly, DJ Download and DJ Tunes.

In addition to supportting the wide range of labels they handle, with an average of 2 physical releases a month and additionally all releases in digital format and exclusive digital only releases, they have created the iPool, a dedicated website that delivers both promotional music and the iPool Supreme Membership that delivers music via a unique podcast link.

What would the use be of all these investments without……NEW ARTISTS ! Since the company start they have signed a bunch of new and old talents such as Paul Edge, Andy Tau, Arto Kumanto, Joost Glazenburg, Eddie Sender, Ville Lope and Audiophox. Undoubtfully this list is incomplete and unfinished taking into consideration the amount of good stuff that’s rocketed in their direction. With roughly 500+ demos every month, needless to say this is titanic. The continuous flow of new good tracks offered to them and the increase of young talented producers out there obviously had it’s influence on the number of labels currently residing under the Banshee Worx umbrella. First there’s the fully owned labels which are 100% controlled by themselves such as all the Bonzai trademark imprints, Green Martian, Camouflage, Progez, Nemesis and a dozen more. Then there’s the labels they run in collaboration with label managers such as Piston Recordings (Rogerio Martins), Subtraxx (Miika Kuisma), J00f (John ’00’ Fleming), Tripomatic (Pete Miskelly), Real Music (Andrew Parsons) and Troia (Pedro Goya). Last but not least, they have labels that joined the Banshee family for digital distribution purposes such as Missile, Neuroscience, Wonka, Warehouse, Dj-International and Strictly Rhythm Benelux,..

In 2009 they had a new upgrade with the Banshee-Entertainment Division which will ensure the the promotion and marketing of their artists towards the deejay circuit. Furthermore they will set up between 6 and 8 events yearly in the Benelux territory and negociate franchises to organize Bonzai events worldwide.

Now with 2010 in front of the door, new labels are being signed up including Olympik Records and Belgian techno legend Frank De Wulf putting them in charge of his entire old and new catalogue.

History learns people have always seen Bonzai Records as ambassadors of quality electronic music regardless of the genres they touch. Over the years music has evolved, so did their musical taste, a combination which is pushing them to think more forward.

In order to focus on what they really want to do and giving artists what they deserve, it’s become necessary to discontinue some of their labels. Most of these labels are part of that trance scene which they helped develop in the early 90’s. The trance scene of today does not fit their vision, so they will fully focus on 3 remaining trance labels (Subtraxx, Camouflage & Nemesis) and on quality progressive trance.

You will wonder now what they really want to focus on, well deep progressive, mini tech, tech house and real progressive house as they have been doing in their own way over the past year on Bonzai Progressive and Bonzai Basiks.

2010, a year of change... major changes! The company has been split up in 2 divisions, each running entirely independent from each other. On one side they have the Bonzai Progressive set up which will have it’s focus on House, Tech House, Techno, Deep, Chill and Lounge. Obviously these changes had a big influence on the labels remaining in the BP division, although slowly but surely, styles and sounds have been converted and shaped into what it is today. New labels have been launched such as Eyepatch Recordings (Deep Techno/Deep House), Mint and Mustard Recordings (Tech House/Funky House) and more recently Howz Choonz (Tech House/Funky House). These imprints have been exceptionally well received over the last months and have positioned themselves amongst the already established labels in those genres. This department is under management of Fly.

On the other side there is the Subtraxx division which is a docking station for all trance & dance related labels Camouflage, Nemesis and Subtraxx itself. Management here is with Ville Lope.

Furthermore there is the digital distribution which has been growing enormously over the last 2 years and has without a doubt become a highlight for us in today’s insane music biz. With labels such as Renaissance, Azuli, Gusto, Deviant, Dance Opera and a few dozen others joining the Bonzai family it’s needless to say this has become a huge part of today’s business. With a few other big signings in the pipeline, they can only nod that this department has done well over the last years under the careful management of Marnik.

Bonzai Records invite you all on this new and exciting journey!

More in this category: Previous Eelke Klieijn Next Frederico Scavo
back to top